skip to main | skip to sidebar

Taken' a Trip Out To The Magic Bus 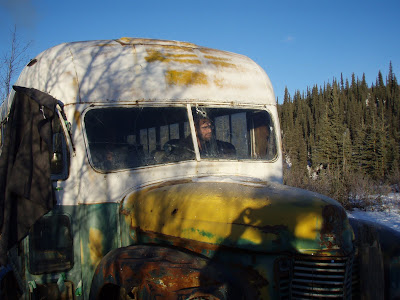 Our thirst for exercise and adventure was certainly quenched a couple of weekends ago when Ed hatched a last minute plan to ski out to bus 142. This bus has become a shrine for some and a point of contention for others, but after our trip down the Stampede trail I believe that it should stay put and all comers should have the opportunity to share in Chris McCandless's story. 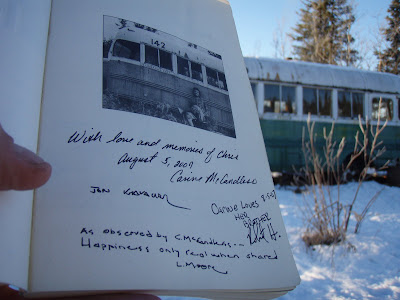 John Krakaur's book "Into The Wild" which was followed by Sean Penn's movie version of the story has peaked interest in the story of Chris McCandless's free spirited travels and ultimate death in bus 142 after being trapped in the wild by the Teklanika River. The bus now acts as a shrine and travel destination for people who have taken an interest in the tragic story. Our visit was not meant to be a pilgrimage but ended up a very memorable experience for a number of reasons. This copy of "Into The Wild" was left in a tattered suitcase under a rusty bed spring in the bus. 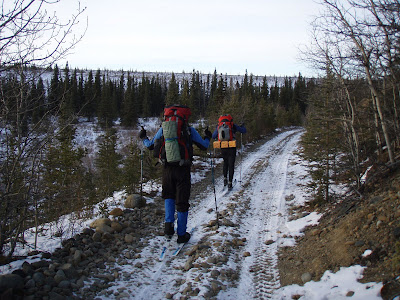 After about a mile we found some windblown, south facing trail that was not too conducive for skiing...these conditions did not last long. 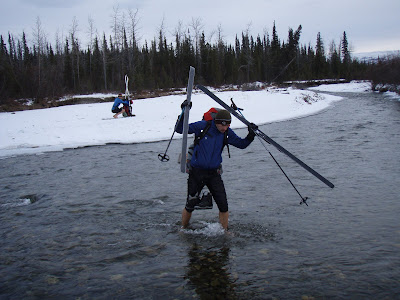 About eight miles into the trip we had to deal with our first real uncomfortable hindrance...the Savage River. When Ed brought this trip up to me in the middle of the week I mentioned that the two major rivers that we would have to cross might still be open...he never replied, so I figured that his vast knowledge of hydrology must have left him confident in the conditions. Actually he just figured that if he planted the seed that I would ultimately come around to agreeing to the trip. He was correct, but now we had to deal with some cold feet. 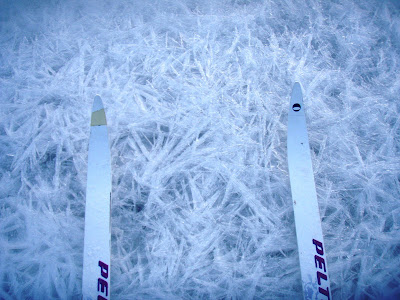 This is some interesting ice on the East bank of the Teklanika River. I don't have any good images of us crossing this river. It was deeper and faster than the Savage, but after some scouting we found an ice bridge that we were able to ski across without having to get wet again. 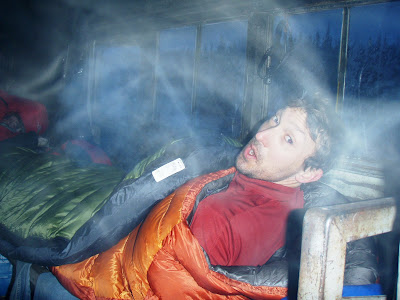 We had not intended to stay in the bus but once we arrived at the site we were all fairly sweated up and after gathering some wood and started a fire in the barrel stove. We figured that bus 142 provided the nicest accommodations in the area so we rolled out our bags and rested fairly well..I can see how McCandless was attracted to this site. There was a little smoke that escaped the old stove when I took this shot...or maybe we were not alone? 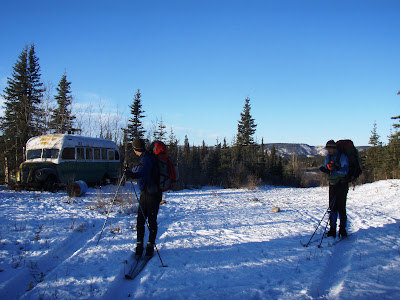 After a relaxing morning and a warm breakfast it was time to get started on our 20 mile ski back to the vehicle. Dan and Ed take one last look before we head out. 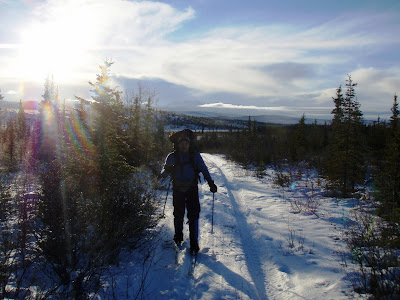 There had been some sort of ATV that broke trail for us...a snowmachine would have made for easier going but beggars can't be choosers. 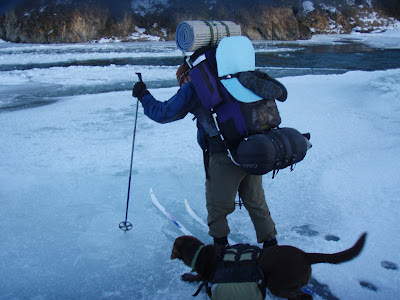 Things got a little hairy once we reached the Teklanika River. Overnight the water level had risen and our ice bridge had about six inches of overflow covered by a thin sheet of ice that I broke through when I tried to cross. My skis stuck between the main layer of ice and the new crust while the icy water made its way into my boots. One of my skis came off when it tried to back out of the situation. It was below zero so I had to hurry up and get my boot back into the binding so it would freeze together instead of freezing up, disallowing me to use my skis for the rest of the trip out. We put plastic bags over our socks to act as barriers between our boots and our insulating layer. This made the rest of the trip out fairly intense causing us to ski hard for periods of time to try to maintain a reasonable level of comfort, then breaking to shove food down in order keep a steady flow of calories in our system while occasionally massaging our feet to insure that nothing was freezing up...I guess that I would call that type two fun. 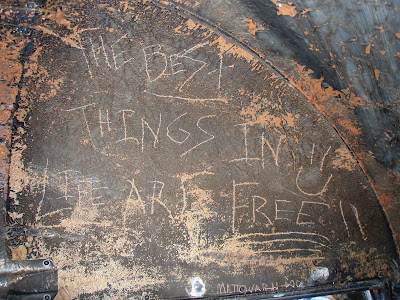 Great friends, challenging trails, and a phenomenal landscape made this a memorable trip...I guess this inscription from bus 142 says it all.

To read more about this trip check out Ed's blog: http://edplumb.blogspot.com/2007/11/skiing-into-wild-night-at-bus-142.html

Posted by Brian Jackson at 8:31 PM

Nice job Brian! Great to hear from you. Keep sending us the blog updates. FGITA

What a great trip!
I watched the movie in Lisbon, Portugal, two weeks ago.
It must´ve been amazing being in the same place that Christopher once was. The Magic Bus...
I just wonder how that bus arrived there...

Wow, looks like it was an amazing trip! I am flying to Alaska next month and am hoping to visit the Magic Bus, (if I can find it) :) Would you recommend other places to see while I am visiting?

Hey! That looks like some trip you made there! I'm actually going to take a trip out to the magic bus soon myself but I can't seen to be able to find any coordinates or mappings for it. If you wouldn't mind mailing me and letting me know how you got to it I'd be really grateful. I'm at jackreynor23@gmail.com. Thanks a lot!

Wow, some trip! I've walked the first mile or two (in August) but was unprepared to go further...I will someday! Cheers from a UAF alum in Seattle, WA.

Amazing. I just saw the movie like a week ago and im... i dont know how to explaing my feeling right now. I just know that I need to go to that bus some day soon.
Again, Amazing! I admire everyone who got there and most important leave everything as it is (pants, the biblie, the notebooks, the shair... everything!!!

i think that was so low from your part sleeping in the magic bus where chris died. show some respect for the dead. i hope that was macccandless spirit hoping to kick you out.

Great blog posts and pictures by you and your friend Ed. Your trek to Bus 142 was definitely full of adventure as well as honor and respect for the memory of Chris McCandless. Anyone who says anything otherwise (such as the previous poster) just doesn't get it.

What an awsome trip! I can't imagine what it must have been like being in the same place living the same time. I am planning a trip right now to go out there and experience it for myself. It would be such a big help if you could help me with location information or even a emailed map would be awsome. My email is chj130@students.jwu.edu

Can someone tell me HOW the magic bus got there in the first place. HOW? Was there a road? Who abandoned it? C'mon this is common detective work and it seems no site has the answer!

The bus was i believe driven out there when the area, not too far past where the bus is now, was mined heavily. The "stampede trail" was blazed to allow access and 3 of those old buses were used to take miners out (correct me if this was not the purpose). The road was intended to be a fully fledged road but the construction was halted part way through and two of the buses driven out. One bus, bus 142, was left as a hunting shelter. I also intend to visit the bus in the next few years, however living in New Zealand makes that quite a trip :), one day.

I just have to say... I thrive in any stories about travelling to the bus... Its something I hope to do myself one day and is a story that I hold close to my heart... but sleeping in the bed that took Chris McCandless' life... have some respect!

Congratulations on your odyssey to the magic bus... It looks pretty difficult, but also hope to visit one day in the near future. I've read the book twice, and seen the movie. Chris was an amazing person who's story has touched me deeply and spirtually. I would also appreciate it if you could direct me with some info on how to get there. Thank you. lcadena77@yahoo.com

Hello nice site let me tell you that you have to buy viagra is the easy way to get better ,also the web is the fastest way to get viagra online and if you want it cheaper get generic viagra thanks you.

How did the bus get there? Read the book!
1961 Yutan Construction of Fairbanks got the contract to make a mining road and skidded 3 junked buses out by D-9 caterpillar for use as worker housing. The project was halted in '63, after which 2 of the buses were removed, leaving the third as a hunting shelter. -from pg 10 "Into the Wild"

Great such a wonderful post. With the many blogs which I have encountered, I never expected to see a very beautiful post online..After reading this one, I felt so lucky to see its content..-) Thanks a lot the nice information, I like it so much. -- sofitel hotel washington dc

Keeping up with my life in Alaska 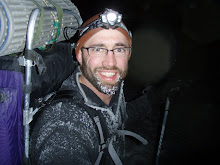